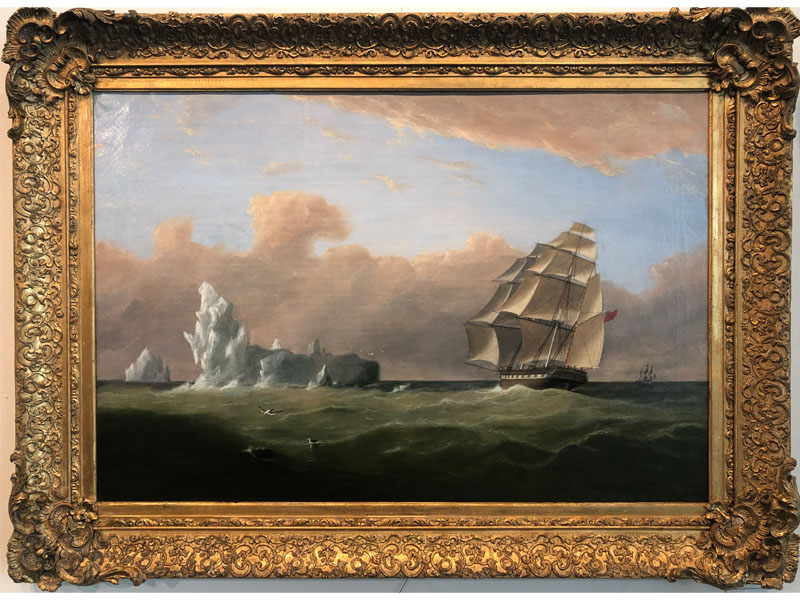 Thomas Robertson (c. 1819-1875?), marine painter and mariner, was born in England and spent most of his life at sea. Little is known about his artistic training but by 1853 he had settled in Melbourne and was appointed a committee member of the Victorian Fine Arts Society during the same year. Records reveal that Robertson contributed eight marine subjects to the only exhibition held by this society, in August 1853; other works were shown at the Victorian Society of Fine Arts (1856), the Geelong Mechanics Institute (1857) and Messrs Baird and McDonald's exhibition room in Ballarat (1858). He later spent time in New Zealand, where he continued to paint and exhibit, and reputedly died in Yokahama, Japan about 1875.
Unlike other colonial marine artists, such as William Duke (1814-1853), Frederick Garling (1806-1873) and Haughton Forrest (1826-1925), Robertson was also a master mariner. It is known that he made regular crossings between Melbourne and Launceston from January 1854 to July 1855, as captain of the steamer Lady Bird; and between 1865-66 was secretary to the Marine Board and inspector of steamers at Port Chalmers, New Zealand. This combination of skills was duly noted by the local press.
' All of Robertson's documented Australian works were produced during the 1850s, the era of the great clipper ships. They not only include individual ship's portraits, which may have been commissioned by owners or captains of the shipping lines, but also large, more general themes. His portrait of the Aurora probably depicts the barque of the same name that sailed from Southampton to Adelaide in 1856, under Captain V. Ryan. The view shown here, with its towering iceberg, suggests that Robertson may have returned with the vessel to England, sailing back via Cape Horn in order to catch the 'roaring forties'. Alternatively, the work may be a commissioned portrait. Although described by the Hobart Town Courier of 1 October 1856 as 'one of the best marine painters in the Australian colonies',
Few of his works have been recorded however his Portland 1858 with the Ship Francis Henty (1858, State Library of Victoria) was included in the 150th Anniversary. Exhibition, Victorian Vision: 1834 Onwards (1985) and in 1988, the Australian National Maritime Museum, Sydney acquired his Red Jacket in Hobson's Bay (c. 1856). Works by the artist are also represented in the collections of the Mitchell Library, Sydney; Dr Joseph Brown, Melbourne; and a number of New Zealand institutions Aurora Navigating the Ice Floes is a very welcome addition to Robertson's known oeuvre
Extract Sotheby catalogue 21/8/1995