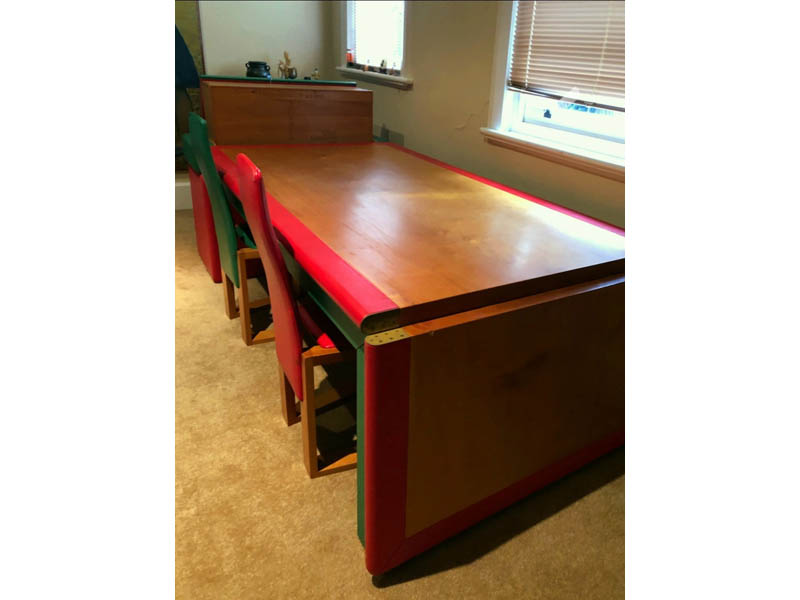 The work is an extendable table and desk by Kevin Perkins. It is a 2.77 metre long, 1 metre plus wide Huon pine table, with red and green leather panels and a hidden, counterweighted pigeon-hole desk compartment. Kevin Perkins believes it to be made from a single biggest piece of Huon Pine in the world. It’s made from timbers salvaged by Kevin from Lake Gordon and the Franklin River in 1976.
It is partnered with Lot 32, which are the ten Reg Livermore chairs that were designed to partner the table, also in red and green leather.
This unique piece of craftsmanship has never previously. been exhibited
Peter Byers commissioned the table from Kevin Perkins in 1982, when he was Chair of the Tasmanian Arts Advisory Board. Kevin Perkins went on to design and make the furnishings for the Prime Minister’s suite in the new Parliament House 1985-88.
As Richard Flanagan said in his appreciation of Perkins “the power of his pieces – so palpable when seen but hard to apprehend in a photograph of his work – comes from his always working to liberate the possibilities of the wood, rather than battling the material. He constantly seeks, as he puts it, to celebrate ‘the treeness of the wood’.”
. A weighty single piece of Huon pine is the table surface, over two metres long and one metres wide. It celebrates and creates a second life, continuing a single trees' millennium of existence. The table’s extendable end slices open across a metre of honey-gold wood to reveal the wood-rings. The hidden desk compartment, carved with “SALVAGED Lake Gordon and Franklin River 1976”,
The table sits 10 comfortably, but was most used as Peter Byers' desk. It is in excellent condition
(1) Flanagan R (2009) ‘The Kevin Perkins’ Object Issue 58 pp 18-20 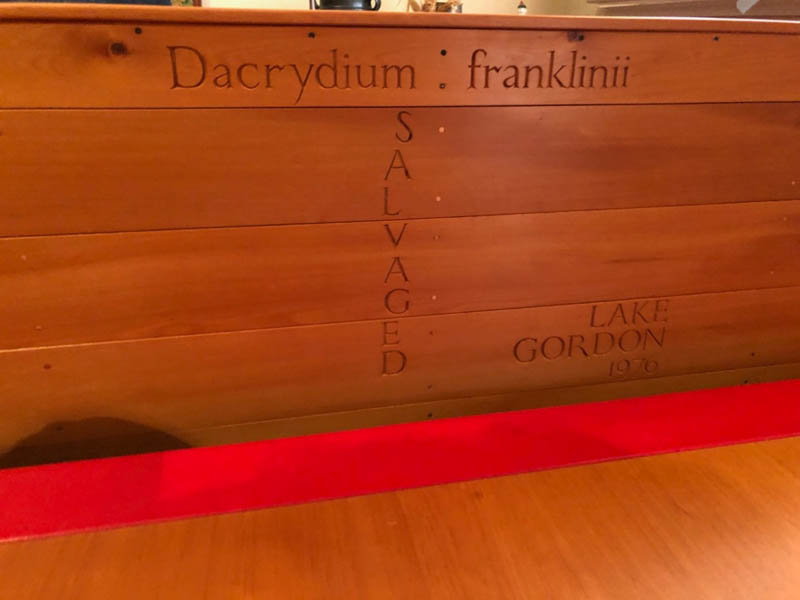